Yes this week has been interesting. Inspired by the first Episode of Fear the Walking Dead I did a painting of Gloria the zombie girlfriend who main character Nick finds snacking on some poor fellow early in the show. She made an incredible impression, as scary sexy horror gals sometimes can. Anyway I posted my painting on Instagram and Lexi Johnson @lexikj reposted it and re-tweeted it which was really sweet of her. 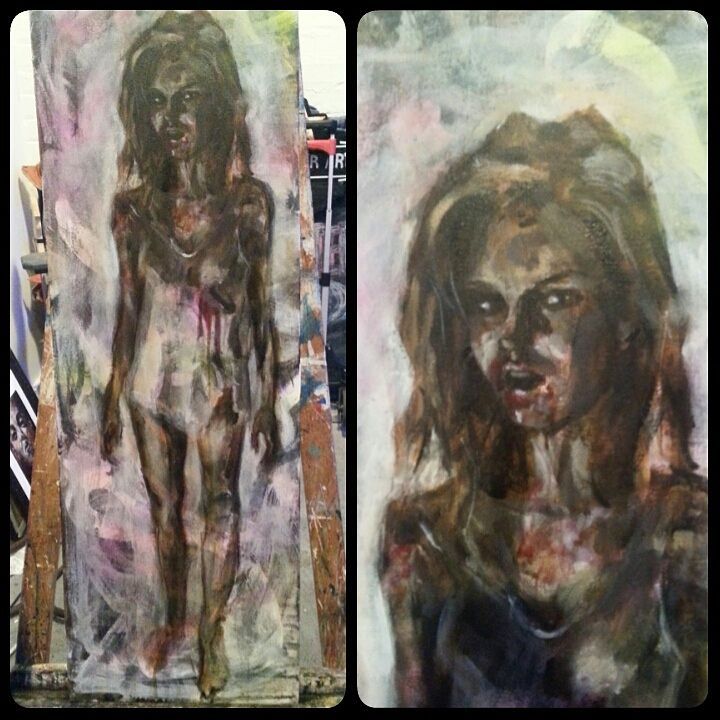 Today went to New Orleans Saints training camp. As I’m walking to the field from my car Air force One flies over bringing the prez in town to do some Katrina Anniversary speeches and glad-handing in the Lower 9th Ward. Anyway today was the first practice I have been to which didn’t result in intense melting of the fans because it was pretty pleasant out. As practice ended I got some signatures on my Saints player drawing from a few years ago by the Big Uglies of the O-Line including the Zach Strief and Mike Golic Jr. son of Mike Golic from ESPN’s Mike & Mike show. Also got to talk to Joe Morgan about his tattoo’s and he showed me a new one he just got recently. He estimates that he has somewhere around 30-40 hours clocked in getting tats. They all seemed like single sessions of up to 7 hours at the most. Which bring us to this

Drew signed my painting. Mind you Drew is a signing machine. so he usually signs for everybody. Not only that but he also gave me his Showbiz signature, when he does these things signing hundreds of things sometimes he signs a quicker version, but this sig has real character I think. Also he said “That’s Cool”! which was really nice. I mean he is usually signing the same NFL gear and mass produced stuff that people buy from Walmart or wherever so it was really nice. So it was a good week for my fandom which is nice because I don’t get as much time to pursue this stuff with what I am normally working on. Thanks for reading!